A+ A-
Print Email
Surprise everyone, Earth has now two unofficial moons. And you read it clear, the Earth have two unofficial moons. The latest discovery was announced by the National Astronomical Space Agency (NASA) after the object was observed hovering around the Earth's orbit. The announcement made the public curious because how come such a celestial body was just recently discovered after the space agency program was established more than a half-decade ago during the 1990's decade.

However, the newly discovered moon is not just your ordinary object that you can see in the sky with your naked eye. This is because this second moon is much smaller than our traditional moon that is usually visible during the night sky. Even if you prefer to use a telescope, you will still have a hard time searching for that missing object because it is so tiny that it needs a high-powered camera lens in order to zoom thousand times. Which means that only observatories around the world can only see and observe this small object that is following the Earth's orbit around the Sun.
The object is a small object that is named as HO3 2016. The Pan-STARRS 1 asteroid survey telescope was responsible for detecting the object that became an instant sensation to the world. The observatory was located in Haleakala, Hawaii where it was responsible for discovering the object on the 27th of April. Obviously, the newly discovered object is a small asteroid that is considered as a near object floating near the planet Earth.

The interesting part of the discovery is that the object orbits similarly with the Earth's orbit. This means that it is a new companion to Earth because it follows a parallel path with our planet as it revolves around the Sun. This object is regarded as a quasi-satellite because it has a similar orbit with the Earth as it rounds its orbit. Scientists are still trying to find more about this object to determine if it has already a permanent position near our planet or it was just recently catched by the Earth's gravitational pull that make its path to be parallel with the planet's orbit.

The size of 2013 HO3 is at least 40 meters across and 120 meters and 100 meters or 300 feet wide. The object is believed to have been orbiting our planet for at least more than 100 years, but scientists presumes that the object stayed longer than 100 years. The asteroid is also believed to be accompanying planet Earth for more hundred years to come. This means that Earth will have at least two companies as it revolves around the Sun for several centuries from this day on.

As a quasi satellite, its orbit is drifting at a distance between 30 and 100 times, which is kinda tilted across the orbit of the Earth around the Sun. The elliptical shape is unusual that makes it a false moon or satellite with Earth.

Scientists indicated that the pattern of the quasi-satellite's orbit does not pose a threat to our planet because the orbit of the satellite is too far for our planet to interfere with the object's movement. The orbit is more than 15 million miles from Earth, which has no direct effect to the planet, including its moon. 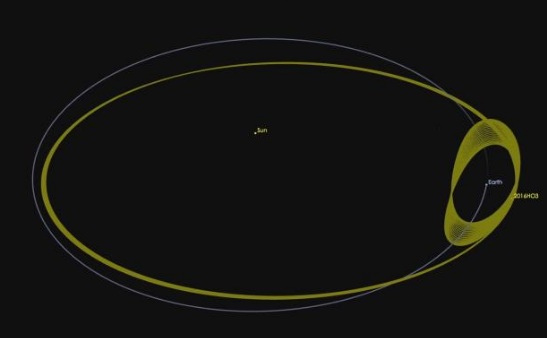 Our planet can use its gravitational force for any celestial body that is traveling nearer than 15 million from our planet. This was unlike the cataclysmic asteroid 400 million years ago that wiped out the entire ecosystem of the planet.

Aside from 2016 HO3, there are other other quasi satellites that are also orbiting around the Sun that accompany's the Earth. These are objects also have similar orbits. Cruithne, which is a quasi-satellite with a bean-shaped orbit. This object is also not a potential threat to our planet for the next several years.

There were claims by other scientists that Earth have many smaller satellites with similar orbits. However, mostly were just speculations that have yet to be discovered by scientists. Another reason is about the lack of equipment to confirm speculations regarding quasi-satellites.

In the near future, there will be more quasi-satellites that will be discovered by our next generation of scientists. Together with new equipments or facilities, cosmic discovery in the future will be more convenient and realistic.

Posted By The Story of Anthony
Labels: HOME, news, TECHNOLOGY
at Monday, June 20, 2016