A+ A-
Print Email
Just days after her win as the new Miss Teen USA 2016, Karie Hay draws flak due to her controversial racial slur tweets in 2013. She is now under scrutiny after she made a repeated racially sensitive tweets towards her estranged friendship in her social media account. As she is currently celebrating her win as the new queen of the teens being crowned as Miss Teen USA 2016, she might be expecting legal or ethical consequences that might cause her the crown.

As based on the history of her Tweets, she repeatedly published numerous racial slurs against the same person. Karie used the "N" word towards a variety of person whom she was having a conversation on her social media. The Twee was discovered being published on August 1, 2013. Her tweets made numerous disappointments from several fans, pageant enthusiasts, and supporters of Miss Teen USA organization. Her tweets could risk her current title as the reigning Miss USA 2016 because she might be in trouble due to her past irresponsible acts on her social media account.
During that time, It may have seemed that Karie was just having a friendly conversation with some of her friends when she made jokes using the "N" word with some of her friends. The conversation was quite a regular talk with her friends. However, some of her friends seem not too comfortable with the way she repeatedly publich the same racial slur towards her friends on Twitter.

There were various reactions that were observed from random social media accounts. On the positive side, netizens indicated their understadable nature of a young teenager whose actions are reflected by their emotions. However, their statements made by their published comments or tweets does not reflect their real personality. Some even stated that she was too young during that time that is why she used words that makes her believe as an expression to initiate jokes or funny comments with her friends on social media.

On the negative side, Karie is still criticized due to her remarks towards other race as she is starting to be the center of discussion to various rights advocates. Many human rights activists find it hurtful that a certain beauty queen has had history for using racial slurs towards other individuals. Even though for her it was a joke, others find it very uncomfortable, especially for the African-Americans. This is because she represents a neo-supremacist view of a white American woman who views her race as the supreme race in the world. 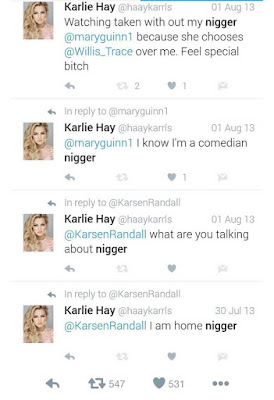 As an ambassadress having her past ethical issues revealed, she can be at risk for losing her crown. Her repeated racial slurs could spark a negative reaction to the whole African-American community. This is especially that she is of a Caucasian ethnicity.

Pageant critics, analysts, and fans are now pressuring her to speak up about the latest controversy regarding her past Tweets for further explanation about the issue.

Even if her defense claims that she is just joking around because the word was not used against anybody, she can still be at risk for losing her crown. A joke using a sensitive remark can always stimulate ethical controversies that could rip the hearts of her fans.

As a title holder of a prestigious large pageant, a beauty queen might be at risk for being stripped off of her crown due to her irresponsible activities. Any irresponsible activities from either the past and the present reflect the person's image. This is because it shows that there is something inappropriate from the past that might cause a significant ethical concern to the person of interest.

The Miss Universe Organization, who also handles both Miss USA and Miss Teen USA pageants is yet to comment regarding reigning Miss Teen USA 2016 Karie Hay's past Twitter remarks over her social media account.

Miss Universe 2015 Pia Wurtzbach and Miss USA 2016 Lakeisha Barber have not yet also commented about the issue due to their busy schedules arranged by the Miss Universe Organization.