A+ A-
Print Email
Japanese celebrity who is now making a showbiz career is now pursuing Bureau of Immigration after one of its employees posted her picture along with her passport online. Maria Ozawa believes that as a foreign applicant to grant her a working visa in the Philippines, her privacy should be always undisclosed. However, this was not the case for her as she caught one of the employees who posted a photo of her Japanese passbook together with her photo online.

As based on her statement on her Facebook account, Maria Ozawa does not know if she should be mad or sad or even post the photos that she saw online. But she believes that this is something that is really wrong so she decided to share it publicly through her personal Facebook account. This is because this is to relieve her agonizing personal issue with her privacy where she was only intended to apply to extend her working visa in the Philippines. But since she was shocked that her personal information has been circulation through the post of an employee, she became worried and uncomfortable to this particular post online.
Mariza indicated that "This is very wrong. Immigration is a place where people TRUST and give their private accounts or personal details. However, look what the employee have done to my privacy by posting it on their social media accounts." She also stated that "I bet you know this girl, which made me so mad and also sad at the same time".

The Japanese celebrity wants to know that public that she admires and love the Philippines. Maria is doing everything for her to stay in this country for good. However, how can she stay her if there are people who intend to commit privacy breach? Maria will understand if the person who did post her personal details on their social media account is her friend or someone whom she already had has already acquainted. However, the person is a stranger, which made her feel vulnerable and scared that her personal information might be leaked in public. Maria calls the employee's act as "bastos", which is a Tagalog term for rude in English.

The person she was referring to is Armee Camzon. However, it is not confirmed if that name was a real name of the person responsible for posting the passport of Maria Ozawa along with her personal details online. Armee's position at the Bureau of Immigration is not clear if she is an employee, intern, or a volunteer at the agency. She then deactivated her Facebook account to prevent herself from being at the center of backlash by irate netizens online.

Before deactivating her account, Armee Camzon managed to interact with some of her Facebook friends that she was just posting a famous client, boasting a photo and her passport. Armee was not expecting that the Feedback is the worst thing that could happen to her.

Here are the uploaded photos courtesy of Maria Ozawa's Facebook. 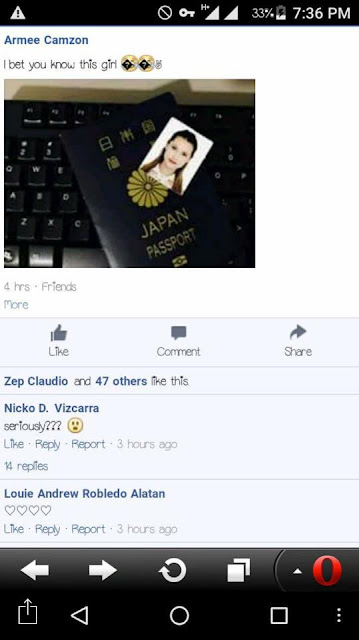 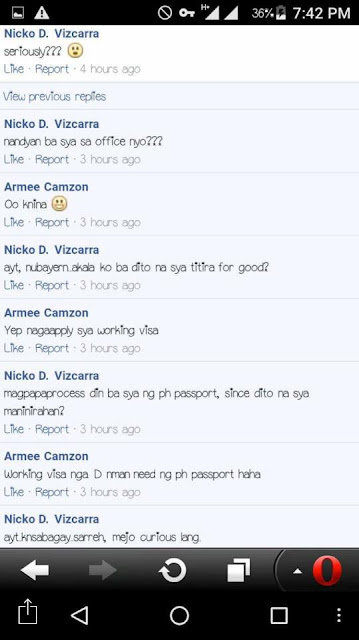 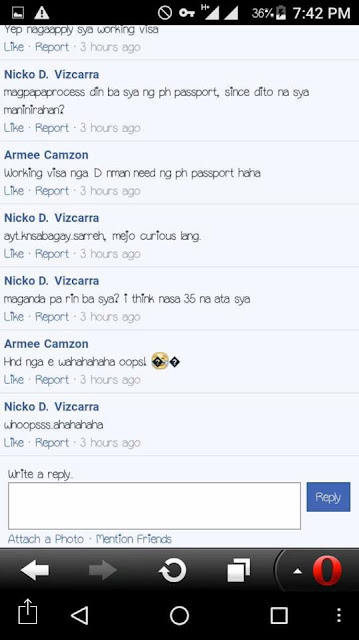 A screenshot from Armee's posts was taken online where she made one statement that further generated strong emotional reactions online. This was when she made an unpleasant comment toward's Maria's appearance during that day that she made a transaction with her regarding for an application for working visa approval. 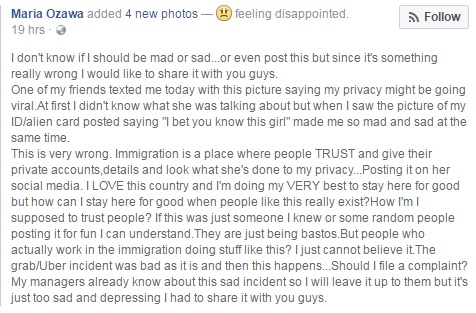 Maria Ozawa is still decided if she will file a complaint against the incident involving her privacy issues with the Bureau of Immigration. But the point is, the incident made her really emotionally disturbed. Her mental and psychological integrity is clearly unstable because she was affected by the privacy issue made by the alleged employee of Bureau of Immigration.

The incident involving Maria Ozawa's privacy issue is a clear indication that there is an ethical violation against the alleged employee of Bureau of Immigration. This is a lesson for everybody that privacy should be always respected because every click that you do will always leak to strangers no matter how old that post is.

Leaking the privacy of a customer is a clear indication that their personal information and integrity has been exploited, which is considered a grave misconduct that is punishable by law. You can be imprisoned, fined, and terminated from your job.

Bureau of Immigration was already tainted with the allegation of bribery and corruption. And now, the agency is dealing with a new allegation, relating to a privacy issue by one of its employees.