A+ A-
Print Email
When a video becomes trending in social media, the attention from online users become viral enough to make him popular. This is especially when a user uploads a video containing a disturbing substance is sensitive enough to generate an outburst of emotion from online users who watched the video and then left several comments. Other users share the video to their personal space so that their friends can also watch the video and may also share it with their respective space. This behavior generates a new form of an online matrix that makes the published material viral as it increases attention to other social media to become curious and watch the video.

Initially, PO2 Manuel Carvajal Taytayon caught the attention of social media users when he made an altercation to a pair of minor in a certain road in Manila. Initially, PO2 Taytayon became enraged and hastily lambasted the two young boys when he felt uncomfortable with their presence along the road. PO2 Taytayon unbuttoned his polo shirt to show the young boys that he is carrying a fire arm. However, he was not in uniform as he was not on formal duty during that time. The boys became terrified when they saw the policeman's gun as he continues to lambast the two along the street that caused a scene in a street in Pasay City, Metro Manila. The boys took a video of PO2 Taytayon while showing his fire arm. 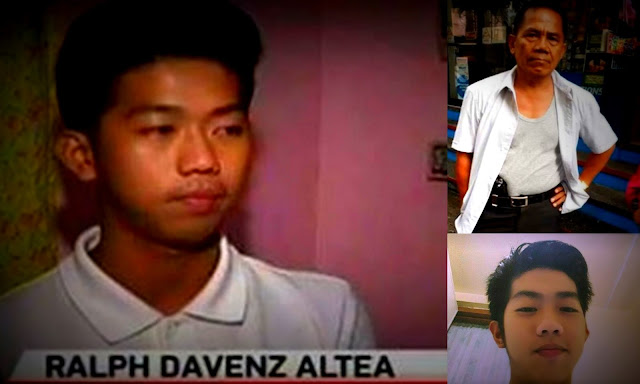 One of the two boys uploaded the video online and it went viral just hours after it surfaced on social media. The video caught the attention of some media outlets for them to initiate an interview. It was revealed that Ralph Davenz Altea was at that time along with her brother when the incident occurred.

After the incident, PO2 Manuel Carvajal Taytayon was removed from office and the video is now under investigation by the police. Ralph Davenz Altea filed several charges against the policeman such as violation of Republic Act 7610, which is the special protection for children from abusive practices. However, PO2 Manuel Carvajal Taytayon counter-filed case against the boys for cyber bullying against him that destroyed his career and image to the public from that particular video. Meanwhile, another video surfaced on social media featuring PO2 Manuel Taytayon berating another by stander at the SM Mall of Asia premises.

The issue regarding the altercation between the boys and the policemen were thought to be over after their case is now pending review by the respective courts as well as by the police authorities. However, the issue is then concentrated on Ralph Davenz Altea. His name never gets ignored on social media that made netizens curious about his presence. Netizens keep on posting his posts, comments, and other online activities to various groups and pages. As hours pass by, netizens shifted their dismay from the policeman towards him, which is an unusual scenario for an incident in this matter. Comments are also pointing out towards the behavior of the young boys after watching the video surfaced online. As of now, the social media profile of Ralph Davenz Altea has been deactivated due to negative comments against him.

1. He is known for his insensitive remarks: After his interview by one of the media news network in the Philippines, Ralph left some comments that are considered insensitive by other social media users. They find it offensive because it shows his personality on how to handle a serious case in a humble manner. What netizens felt was that the young boy was not considerate enough towards the feelings of others by continuously lashing out the policeman after the matter has been already forwarded to proper authorities for further investigation.

*READ: 5 Tips on how to make  a "Snake on Screen" appear on your mobile phone

2.  PO2 gained supporters from INC: Iglesia ni Christo (INC) is a Christian sect in the Philippines. PO2 is a member of INC and known as a devoted follower. One distinct nature of INC members is their strong unifiable character by supporting each other despite uncertainties and challenges. In this situation, INC members felt the need to defend their brother in Christ by a person whom they believe was responsible for destroying the officer's reputation by uploading a file on social media that got viral. Many defenders came to Ralph through his social media profile to express their sympathy towards PO2 Taytayan.

3. Ralph is a minor: Whether this young boy is either minor or not, he is already nearing the adulthood stage, in which he is now at the legal age to independently think for himself. Ralph's behavior is associated with his young age wherein he still needs guidance on how to properly address issues in public spaces such as when leaving a comment on social media. His age is one of the key factors that PO2 Taytayan is under investigation by his upper-class colleagues to review his case. This is because there is a huge age difference between the two sides who are commencing their own version of the story regarding the scene taken from a certain road in Pasay City.

*READ: Are you in favor of Martial Law Extension? Here are beneficial facts

4. Behavior in the video: Although the camera is focused towards PO2 Taytayon, the audio reveals his verbal reaction or expression towards the policeman. Netizens who already watched the video can already analyze the behavior of the two brothers while they were filming the policeman as they are caught off-guarded by the person's gun. Although PO2 may have lapsed due to his aggressive behavior towards the children, the audio tells something more about the story behind the video as they continue to collect an audio-visual evidence.

5. Ralph is already experiencing cyber bullying: At first, the media clip pointed towards the policeman, which initially experienced cyber bullying because many social media users made rants towards the PO2 online. But Ralph's behavior also generated harsh comments from various netizens due to his insensitive remarks online. Sometimes, the uploader of the video is not always right because netizens are now wiser. They always take the two sides of the story before they leave a comment over a certain media file uploaded online. Thus, online users always think before they click online. If you are the uploader, you cannot assure that you are always gain the right side of the story.