5 Reasons why Celebrity Sinon Loresca made a public apology

A+ A-
Print Email
When you hear or read the name of Sinon "Rogelia" Loresca, you will immediately remember him as the catwalk diva. Sinon is well-known as the masculine catwalk king who always wears heels on the streets. During the pageant season of each year, Sinon posts random videos of him while wearing either a swimsuit or a gown in a seven-inch pair of heels. The winner of a major international pageant is the subject of his interest. He will wear a replica of the newly crowned queen's dress, swimsuit, and even their hairstyle as he walks along the street. Sometimes, Sinon is seen walking with his buddies wearing an evening gown.

However, Sinon's year-ender was not as pleasant for him as he was involved in a controversy. On the night of December 29th, Sinon was having a good time with his friends inside an undisclosed bar around Manila. Sinon was with his personal assistant during that time. The celebrity already drank a handful of psycho-stimulating beverages that changed his behavior. Allegedly, Sinon became aggressive that he started treating his personal assistant unpleasantly on the other side of the table. His actions generated an attention to other customers of the bar including his friends from the other table. Aside from allegedly mistreating his personal assistant, Sinon also turned against his friends when they start to criticize his behavior. 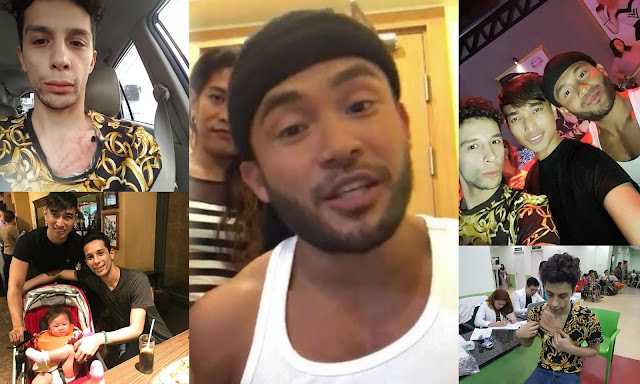 Sinon Loresca is a local celebrity in the Philippines. He is currently based in London wherein he is currently modeling for a fitness brand. His healthy lifestyle generated a positive impression to the members of the LGBT community because of his fit body. Sinon is also signed under GMA talent management department. Sinon's both local and international entertainment project requires him to travel constantly.

There was a controversial statement that was revealed that night. Sinon allegedly stated that why should he apologize to his personal assistant. Sinon says that she is just his maid as compared to himself as a celebrity. Furthermore, Sinon also stated that he can do anything he wants and there's no one could do anything about it. These alleged statement made by him made his friends became irate towards him and started a confrontation. The altercation caught the attention of the bar employees, prompting them to be sent out from the area to prevent further risk of harm to other customers who were having fine during that night.

The apology video was then posted on his Facebook page named to himself, Sinon Floresca. The portion of the apology video can be viewed below this paragraph. After the incident, Sinon made a public apology for what happened during that night. He admitted his negligent actions and is willing to do anything to restore his relationship with his friends. Sinon will do everything that it takes to make sure that his friendship with the couple will be restored sometime in the future. He understands the consequences of his actions during that night and would like to request for forgiveness to all his fans and supporters from around the world.

*READ: 5 Facts why Miss Universe 2017 Demi-Leigh Nel Peters is not yet Dethroned?

5 Facts why Sinon Loresca made a public apology?

(1). Sinon was having a good time with his friends in a bar when the incident happened. The bartenders, other customers, the waiters, and the bouncers who were present during the time of the incident saw the whole incident. As a protocol, any individual or group of customers who initiates a commotion within the area should be moved out before they will cause harm to other customers or staff. The incident is one of the most ignored activities that every bar should ignore because it could cause havoc to other individuals or even to nearby bars. The facility has the right to do anything to protect their facility, employees, and to other customers.


(2). Friends of Sinon Loresca was physically harmed by him during the incident. Drew Farhad Fernandez posted a series of photos of him that appears sustaining a set of deep scratches on his chest. Drew claims that Sinon was responsible for the scratches that caused minor injuries to his upper chest. Drew and his partner drove towards the emergency room of a nearby hospital to seek for an immediate first aid treatment. Drew's case was a medico-legal case that involves the law enforcement agency. Fernandez then made a legal statement against Sinon Loresca for what he did during the incident.

*READ: 5 Facts why we need China Telecom for a Faster Access to the Internet?

(4). Rogelia made a very popular yet a controversial statement. He indicated that he is a celebrity and the person is just his maid and no one could do anything about it. Sinon's statement generated a flashback memories of Anne's alleged statement on she can buy her friends, the bar, and the person she was having an altercation inside the bar. The statement generated a viral hit through social media websites. The content of the statement aggravated the emotions of the users that prompted them to share, like and repost Andrew's post online. Groups, pages, and social media profiles started talking about Rogelia's latest statement and then became disappointed with his dark side.


(5). The case is now under investigation by the authorities. The incident involves both a medical and a legal case between the two parties. Drew is obviously the plaintiff who filed the charges against the defendant, Sinon Loresca. It is not clear if the other party such as the personal assistant will also file for a legal dispute to his talent. Sinon is at risk to face another legal charge if the bar will file for a separate under the court. Aside from the authorities, the GMA talent management is also investigating the case because the network does not want its talent to be involved in such cases that involve controversies. Sinon could be at risk of losing some projects due to a negligible act for several minutes inside a bar.

After celebrity Sinon Loresca made a statement through his Facebook page, are you ready to forgive him? or not?