A+ A-
Print Email
During the preliminary competition, all contestants were able to introduce themselves to the audiences. Candidates have had shown spectacular performances that wowed all spectators in Planet Hollywood during the event. All candidates were able to showcase their sexy bodies, poise, and personalities during the event. The crowd was able to cheer their favorite candidates who displayed spectacular performances.

Miss Universe beauty pageant is one of the most competitive pageants than any other pageants around the world. Every delegates participating in Miss Universe will have to be trained comprehensively as a way to ensure that they will have a proper placement during the preliminaries and the final show of the pageant. Ladies must have to maintain their composure and consistently outshine in every photos and events to make sure that they will always be under the radar of pageant enthusiasts, judges, and organizers of Miss Universe. In this way, placement will be ensured with these promising delegates who will make their country proud during the course of this international beauty pageant. 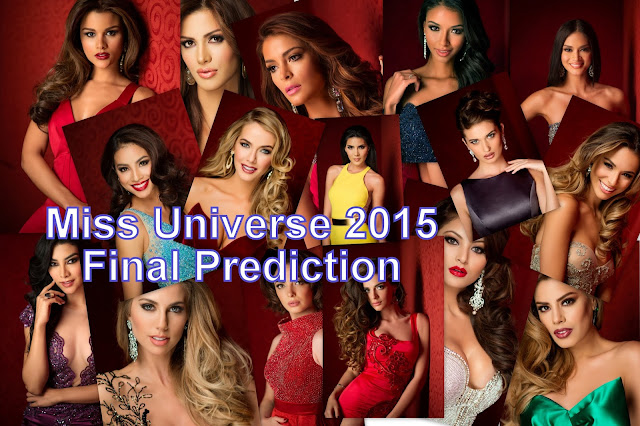 The judges during this event will be choosing candidates that can move forward through the semi-finalist spot. The bearing, poise, elegance, body structure, stage impact, beauty, personality, and confidence will be the main basis points for the judges to determine who will be the deserving girl to enter the semis. Preliminary competition is one of the most important events that contestants will be given the chance to show off their poise and personality to the audiences.


The following ladies that are selected from this blog are believed to have the strongest chances to penetrate the semi-final round during the coronation night. The decision is based from the official photos and glam shots of the candidates. The performances during the recent preliminary competition are also being based on selecting top performing candidates that can enter the semifinal round. Check out if your lovely favorite contestants have been lucky enough to be chosen for this blog as part of the predicted ladies that can penetrate the top semifinalist spots.

After the preliminary competition, the delegates are able to showcase what they have learned during their training. Each delegate spent months of training to ensure that they will properly place in Miss Universe. After the preliminary show, their efforts have already materialized because they already mastered the skill and the will to become the next woman to be crowned during the finals night of the competition.


Here are the 16 Final Predictions

Megi Luka is a girl to watch out for. Her overall performance is strong enough to make her through the semi-final spot. She knows exactly how to angle her pause, her smile, and aura to the audience that makes her look stunning and competitive. This only shows that her professionalism on stage can drag her to the semifinal spot.

Her modelling skills helped her to create a wonderful performance during the preliminaries. Overall, she can finally make it to the semifinals basing from her remarkable attitude on stage. She knew how to pounce each of her walk that can deliver an impressive outcome during the event. Her effortless walk highlighted her fantastic appeal every time that she was being called on stage.

A blonde girl from the land of salsa is also making a positive vibe on the stage during the preliminaries. Her photos reveal her unique and beautiful face that could brush her way through the next cut. Her overall performance is mesmerizing with a calm attitude with a confidence stage presence. For sure, her country will be called during the announcement of semi-finals.

Hoping for a back to back win? This girl can definitely follow the history of Venezuela when it won a back to back victory in 2009. Ariadna's walk is superb. She is the queen of the runway, which is her strongest weapon that can drive her through the semifinalist cut during the coronation night. She has the fierce factor that is a unique quality than other girls of the competition.

Clarissa Molina is another strong candidate that should be watched out for. She has a strong stage presence that could bring a sign that she will be included at the semi-finalist spot. Her sweet aura is another factor that can bring plus points to her advantage as a competitive candidate. Clarissa's overall performance is astoundingly perfect.

The towering lady from the land of love is also a girl that should be included on the semifinal round. Her sexy body with perfect skin tone can elude her presence to be felt by the audience. The wardrobe compliments her height and aura that makes her shine on stage with other contestants. It will not be a surprise if she will be called as one of the semifinalists during the coronation night.

Janet is a surprise candidate that has been underrated before the preliminaries. One of the most interesting fact about her is the gown that she designed for the competition, which is unique and fashionable, giving her the advantage to take the semi-final spot. Her facial features and total body structure is her advantage as a model to rock the coronation night. Who knows, she can be the first country to clinch the crown.

Urvashi's beauty is perfect. She is considered as a miss universe prototype that can easily amaze all spectators. One thing that concerns her is the styling because it can demolish her perfect beauty that could be her downfall. Confidence is observed during her performance in the preliminaries while whipping her waist and shoulders as she brushes her catwalk on the runway.

This European model is considered as one of the most photogenic in this edition of the pageant. The facial aura is her biggest advantage because she can use her face that creates a positive audience impact on stage. Elegance is her secondary weapon wherein her experience as a model can outshine other ladies during the competition.

As a famous TV personality in her country, her beauty is the only candidate in the competition that eludes fierceness. Her killer eyes are her best asset, making her  easily distinguished during the preliminaries. Overall performance is great with a great walk, compatible dress, and strong confidence during the competition.

Laura Spoya is another strong candidate to watch out for. She posses the beauty of elegance with a calm personality. She knows how to play when the camera starts to focus on her face. She has the total package that every judge wants to see on every challenge in the competition. Overall performance is almost perfect, wherein she can easily penetrate the semi-finalist spot.

Pia Wurtzbach did not fail to fulfill her duties as she performed well during the preliminaries. She deserves the hype, making it one of the most favored candidates. Her dramatic presentation and aura that makes her performance unique. You will notice that her superb performance has been delivered smoothly and effortlessly on the stage.

Her homecourt advantage is one of her best asset in this edition of the competition. Her confidence is phenomenal that maximizes her advantage. She is tall, beautiful, and with a bubbly personality dominates her presence on stage. Olivia already learned from her past international experiences that can further develop her skill to make it to the top spots.

The most prepared woman in this edition of Miss Universe. Mariana knows how to use her powerful pose on the stage on every angle. She connects with the crowd by using her interactive expressions while posing on stage. Being effortless on stage creates a huge impact, which makes her one of the girls to beat in this competition.

Pham has one of the strongest stage presence on stage. Her gown is probably one of the best that shaped her sexy body during the preliminary competition. As a known commercial model in her country, her expressive facial feature is her greatest asset. However, she should put more effort on her catwalk, which is probably her weakest spot as was seen during the swimsuit. Overall, this Asian beauty is one of the strongest.


Posted By The Story of Anthony
Labels: ENTERTAINMENT, HOME
at Thursday, December 17, 2015