A+ A-
Print Email
A woman in Legazpi City, Albay Province is now going viral on social media after she was photographed by an astounded passer-by, who was shocked to see an unusual woman on the streets by just doing her regular working routine. The fashionable woman apparently was just sweeping in the streets of Legazpi City when she caught the attention of some passing strangers due to her red heels. This is not an ordinary woman you would see along the streets when you happen to came across her while on your way to either school or at work.

User Yankee Pressman took a snap of the fashionable street sweeper and posted three photos of the woman in her Facebook account. The woman was wearing an orange sweater and pants with floral design while sweeping the streets of Legazpi, Albay. But the most interesting part is her pair of heels. It is a velvet coated red heels that are estimated to be at least between three or four inches high as she sways the broom to clean up the streets. At first glance, you will not easily notice that she is a street sweeper, but upon looking the broom and the large dust pan that she holds, you will realize that this person is really dedicated to her job.
The fashionista street sweeper is identified as Lourdes Punit Encinareal. She can be found at Barangay 37-zone 8, Bitano, Legazpi City in Albay province. She is a local street sweeper for Barangay 37 in zone 8. For her, there is nothing wrong wearing heels in public as long as you are doing your job creatively. Lourdes is also holding her yellow bag while sweeping the streets of Legazpi.

Her creative outfit generated viral hits from Yankee Pressman's facebook account with at least 18 thousand likes while shares starts to boost up. Netizens began to share the photos online and was published on several Facebook pages such as in Pageants and News page. The story of Lourdes Punit Encinareal is just one of the most colorful stories that can inspire you with her determination while working as a street sweeper. Madame Lourdes seems to be happy with her job as she became creative with her outfit while rendering her service as a street sweeper in the streets of Legazpi City, Albay.

Lourdes Punit Encinareal's social media profiles were nowhere to found online such as in Facebook. However, she is expected to have her own social media fan page soon after she will further generate popularity online. Madame Lourdes' social media popularity can further boost her moral support as she has shown to the public regarding the essence of loving your job no matter what it is for as long as it benefits your personal and professional well-being.

Madame Lourdes Punit Encinareal's outfit unknowingly generated positive comments in social media. Citing that she is one of the most creative and fashionable street sweepers that they have ever seen through her photos online. Most social media agree that Lourdes was working with a dignity as she proudly used a pair of red high heels as if she was walking through the runway while sweeping dirt along the streets. 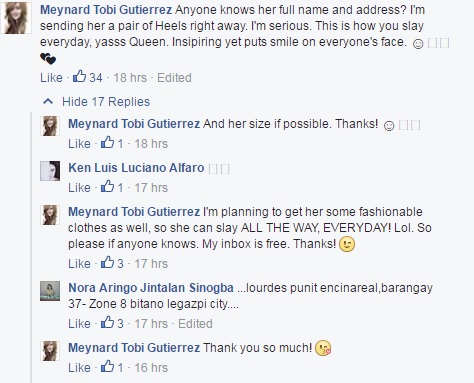 Social media user Meynard Tobi Gutierrez commented to the post published by Yankee, stating the intent to know more about the lady in heels. Meynard intends to send her another pair of heels straight to her doorstep. Other users from Legazpi were quick to respond her identity and her location. Meynard was also informed that Madame Lourdes' shoe size is 8. 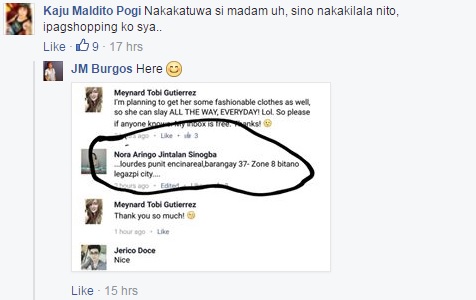 Barangay 37-zone 8 is surely proud of madame Lourdes for keeping her job well-done and in a creative way. Lourdes is a good example on how contentment can be achieved by being creative and always look for creative ways to execute your job well. Who knows, you can be the next person to receive recognition without your knowledge for keeping your job efficiently.
Posted By The Story of Anthony
Labels: HOME, news, PINOY
at Monday, September 05, 2016