A+ A-
Print Email
Although Miss Universe 2012 First Runner-up Janine Tugonon was the closest Filipina to win Miss Universe crown before Pia Wurtzbach claimed it, there were more opportunities offered to her. After successfully representing the Philippines in 2012, Janine moved to the United States to seek for a better pasture. This time, Janine transitioned from being a beauty queen to a fashion model. She was seen being featured in several magazines and commercials, making her a bankable talent in several modeling agencies.

But today, Janine Tugonon is now an official fashion model for Victoria's Secret. You will not be surprised to see her walking the runway during Victoria's Secret annual fashion show that is held in the United States. Janine's inclusion as a new talent for Victoria's Secret further uplifted her image as one of the high-fashion models. She is the first Filipina to ink a contract with Victoria's Secret, which is one of the most anticipated brands in the world. Pageant fanatics and supporters of Janine will have another reason to be proud of her success in the United States. However, many are still asking, will she also be a Victoria's Secret Angel who will walk the runway?
Janine Tugonon is a beauty queen in the Philippines. She was born and raised in Bataan province and then moved to Manila in college. Janine graduated in the Pontifical and Royal University of Santo Tomas under a Bachelor's Degree in Pharmacy with Latin Honors (Cum Laude) in 2010. Miss Tugonon passed the board exams just months after her graduation, making her as a licensed pharmacist.

With a height of 5'9 and a half, Janine was able to polish her pageantry career during her college years. She was crowned as Miss Pharmacy that gained her the license to represent her college department to the annual beauty pageant of her school. She then eventually crowned as Miss Thomasian Personality 2010 at her alma mater, the University of Santo Tomas. Janine's successive wins during her college years boosted her self-confidence that made her decide to try her luck to larger pageants.

Janine made her first attempt by submitting her application to the screening of Binibining Pilipinas Charities Incorporated. She then successfully one of the lucky applicants who got a slot as one of the official candidates for the pageant. Through her initial attempt, she made an astounding performance through the swimsuit, gown, and then on the Question and Answer portion. However, she fell short as she was proclaimed as the First Runner-up. Shamcey Supsup was crowned as Binibining Pilipinas-Universe 2011, Diane Elain Necio while Binibining Pilipinas Tourism 2011 was Isabella Manjon.

For more pageant news and information, visit: Pageants and News on Facebook

Tugonon patiently made a second attempt in 2012 as she tried her luck to join as a candidate for Binibining Pilipinas 2012. Thanks to her previous training and experience, she gained the license to represent the Philippines when she won the crown as Binibining Pilipinas-Universe 2012. She competed in the United States to represent the Philippines. However, she fell short by being proclaimed as the First runner-up. Olivia Culpo of the United States won Miss Universe 2012.

Janine's answer during the final question of Miss Universe: "Being Miss Universe is not just about you knowing a specific language. This is being able to inspire and influence to other individuals. So no matter what language you use for as long as your heart is determined to serve with a strong mind to the people, then you can be Miss Universe".
After a successful stint in the world of beauty pageantry, Janine Tugonon moved to the United States to pursue her academic career. At the same time, Janine was booked as one of the models for MSA modeling agency. There are two notable endorsements, which are Walmart and Wells Fargo brands.

Janine's bone structure and expressive eyes made herself a bankable talent as more modeling agencies were interested booking her. Her jawline perfectly compliments her overall facial structure and when combined with her expressive eyes, every photo of her is precious, making endorsements and campaigns successful. 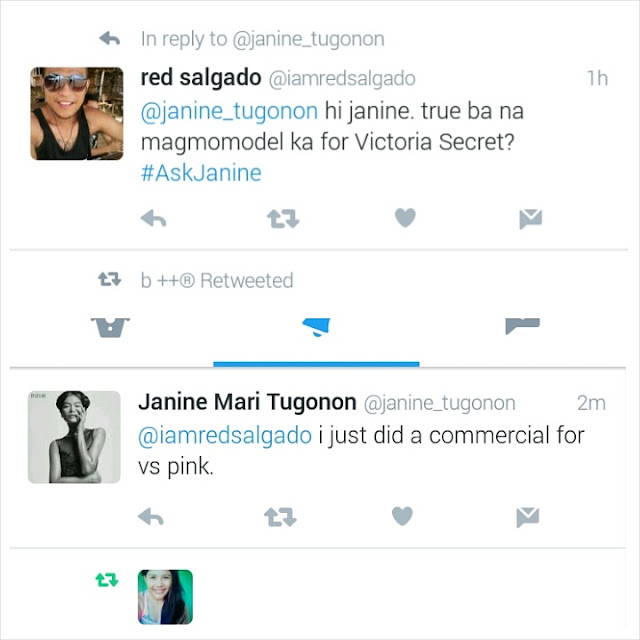 For you to believe, Janine confirmed the news after Twitter user Red Salgado asked if the news is true. And her reply was she just made a commercial shoot for Victoria's Secret Pink commercial.