A+ A-
Print Email
A new shaming incident occurred online is now circulating over several social media websites. The incident involved a woman who unnoticeably took a photo of a man sitting inside the train and then posted it online. The young boy did not notice that his face is already circulating in various social media without his knowledge by a woman he doesn't even know. The woman attempted to publicly shame the guy, but the response made by the netizens went on the contrary to her action.

The woman is identified as Karla Monique Olandesca and Maxene Montero who took the photo of a certain Aldrin Ryan Alcon while the young man is just sitting on the train. The woman was overly expecting the young man to offer her a seat as she was standing while traveling on a train on a standing position. When her expectations were not being fulfilled, her greediness made herself decide to publicly shame the innocent young boy without his permission and then posted it online with a long caption to the photo. Netizens and authorities are verifying the real identity of the victim of public shaming.
Karla's case is an example how greedy to overly expect someone to do a favor just to satisfy your own selfishness. This is a message for all riders in the bus, train, boat, or airports to be always careful because you will never know that your photos are now circulating online without your knowledge.

As based on the post, Karla Monique Olandesca mentioned that she was waiting for the young boy to make a hint for offering a seat for her. She was tired at that time and now heading to her condominium unit. However, she feels that she was waiting forever because the person in front of her did not provide a hint to her for offering a seat. Out of despair, she took a shot and then started blabbing against the will of the innocent young man online and started shaming him publicly.

Netizens are still waiting for the response of "Niko Olarve", which was thought to be the alleged victim of public shaming by Olandesca. MRT authorities were still trying to search for this young boy through his social media account and asking for friends and relatives to help the authorities and urge him to file a complaint against the woman who publicly shamed him without his knowledge in social media websites. 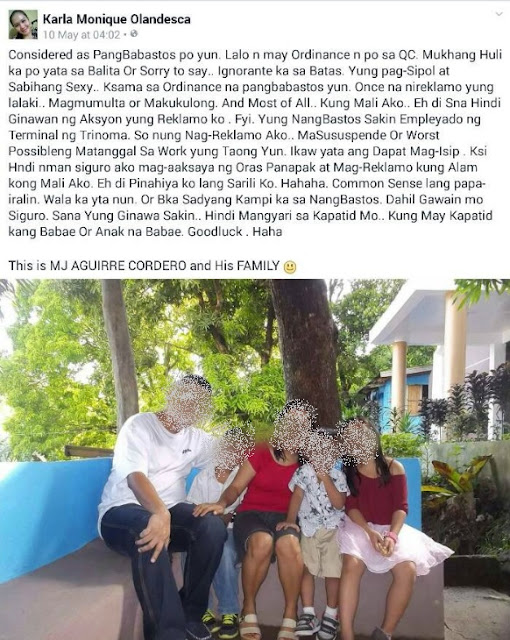 In May, Olandesca publicly shamed another person under the name "MJ Aguirre Cordero". Olandesca claimed that she was publicly insulted when the man whistled her and said sexy to her while walking in a public place. Out of her frustration and anger, she then searched the identity of the man. And when she found the man's social media profile, she grabbed an image and then posted it on her personal social media account.

Olandesca claimed in a paragraph that it is considered an ignorance if one is not aware to a law prohibiting an act where a person publicly whistles a passing lady. However, the man that she allegedly shamed after she filed a complaint against the management of the bus company where the man worked.

Olandesca's actions are a clear example of sexism. The two victims are both males wherein she publicly shames them through posting their photos from their social media accounts. But the perfect example is the latest post of Olandesca for claiming that all males should offer a seat to ladies. A beautiful and attractive lady like her should be always treated well by all men to consider them as a gentleman.

Cases that can be filed against Olandesca

1. Under Article 364 "Intriguing Against Honor": A person can be guilty by intriguing others against their honor is appropriate for publicly shaming others even using social media. Olandesca can be imprisoned between 6 to 12 years if the alleged victim formally files a complaint.

2. Under Article 353 "Libel": Is a written statement made by a person who is publicly and maliciously imputing the young boy for the purpose of discrediting his morality. In this case, Olandesca can be fined at least between 200 Php to 2,000 if proven guilty.

3. Under Article 155 "Public Scandal": Posting a photo for the purpose of publicly shaming an individual, group, or organization is already considered as a form of public scandal. Olandesca already did it twice because she made the posts viral. She can be fined for 400 to 4,000 for two counts, and can be imprisoned for at least 4 months to 12 years in jail for both counts.

Due to her greediness and ungrateful public shaming of an innocent person, most people who read her post were enraged and irate by it. Most people started to take on a side with the innocent young man who was publicly shamed by Karla. Her post was contrasted by most netizens who feels sorry for the victim of public shaming.

However, cyberbullying is not the answer to her case. It is best to formally file legal or ethical charges by any interested party to close the case. This means that counter shaming Olandesca is not the answer to the issue due to her greediness and shameless acts on Facebook.

Let us now stop lambasting her inappropriate act, even if she made a mistake by publicly shaming an innocent person unless she will admit her selfish mistake. We should move on from the issue and return back from being productive with our lives.

If you are in Olandesca's situation, please be courteous to yourself and others, initiate communication and not by over expecting something to please your self-satisfaction. Public shaming by posting photos of a stranger without their online can further harm your personal image or integrity.