Beautiful photos of a badjao girl is trending online

A+ A-
Print Email
An innocent looking girl has been spotted along the streets of Lucban, Quezon. The girl is believed to be from a Badjao tribe, which is an indigent group in Southeast Asia. She has been seen wandering around streets while asking for alms in order to feed her family as well as her family in the area where she was spotted. This girl can have the potential to be a beauty queen.

This girl is seen begging for food and money. She tries anything to keep her family members from hunger. Her stressful routine is hidden from the glamorous face that is not that obvious because you are looking at the face of an innocent girl that is always persuasive to do anything just to survive. However the angelic face of this young girl conceals the real scenario of her family that is struggling for food just to compensate with their grouchy stomach on a daily basis.
The girl was taken by Topher Quinto Burgos, a professional photographer who was also in the area when he was captivated by the physical features of the young woman. The girl was seen during the Pahiyas festival in Lucban, Quezon, Philippines. He then took several photos of the young lady as she continues to ask for food or money from any stranger along her way. The pictures taken by the photographer went sporadically viral on the internet as soon as it was posted online.

Badjao is referred to a group of sea-dwellers who navigates across maritime Southeast Asia. The people also call their group as Sama, Samal, or Sama-Badjao. The group is also called as sea-gypsies because they live in a seaborne lifestyle that navigates the waters across the South China Sea, Sulu Sea, Celebes Sea, Moluccas Sea, Java Sea, Gulf of Thailand, and the Philippine Sea. They are considered displaced inhabitants from conflict areas in Mindanao, Sulawesi, Sabah, and Java where they were affected by insurgencies and civil unrests. The girl being photographed is just one of the displaced individuals who are seeking for a better life even if they beg for basic goods from any stranger that they meet anywhere.

By looking at her features, the beautiful lady's appearance possesses an exotic beauty because she is from an Austronesian descent that is a native distinction of Southeast Asians. Her skin tone is naturally tanned from head to toe, which is giving a vibrant attraction made by her aura as her facial features that culminate her overall appearance.

As the young lady is searching for any stranger to give her food or money, her aura is so magnetic that she is unknowingly attracting bystanders due to her unique beauty. Even if she is dressed in a haggard way, her facial appearance still stands out because she delivers a look that can still manage to attract anyone she passes by along the street even if she is carrying her smaller sibling at her side.

She developed a bone structure that emanates her stunning features, which gives her a positive aura to the public. Her eyes are deep set, the nose is perfectly balanced to her prominent cheekbones. The jawline is perfect with the shape of her face, looking all balanced at all angles.

While the hair is normally tied in an uneasy way, it helped reveal her face to be more attractive. The texture of her skin is highlighted due to the position of her hair. The color of the hair appears to be dark brown that compliments her skin tone. The natural appearance of her face is similarly that of a model who has been shaded with gold or copper tone-based face foundation that makes her look appealing to the public.

The structure of her body is modelesque, featuring her broad shoulders. Her legs look perfect to her height and body structure. As she stands while extending her neck upwards, pushing the chest forward, and slightly positioning the hip at the side, she can be seen doing a modeling posture that makes her look like a professional model or a beauty queen dressed in a dirty and haggard clothing.

The photo of this promising girl wants to attract the attention of fashion stylists, photographers, beauty mentors, and model hunters. This is to hope to have a better future for this lady.

Her real name is Rita Gabiola

Here are her new pictures now 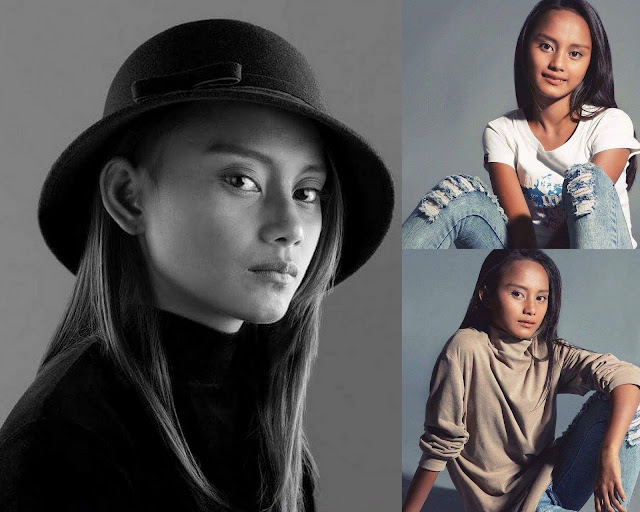 They even paired her with the carrot man 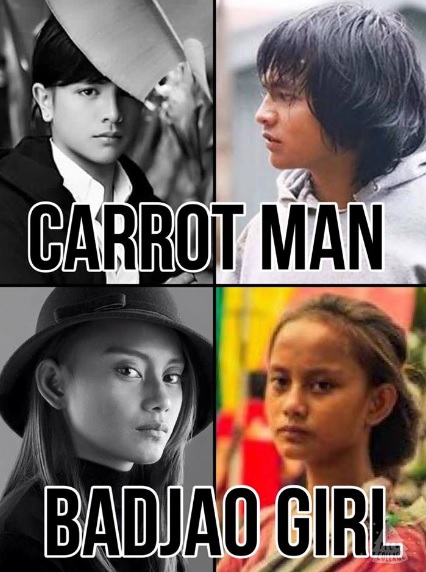 Posted By The Story of Anthony
Labels: HOME, TRENDING
at Thursday, May 19, 2016