A+ A-
Print Email
In every aspect of our life, we always realize about our recent actions because this is a learning process that reminds us to move forward. If we make mistakes, we ought to challenge it by using our humbleness to offer our apologies towards the people who were affected by our actions. A person who is brave enough to admit mistakes deserves either a second or a third chance after committing a mistake in the past. This is for as long as apologies are sincere enough that they will do anything to regain the trust of those individuals affected by their actions.

This is the case of Imelda Schweighart, which is the reigning Miss Earth Philippines 2016. She is very sorry for her recent comments towards the Philippine President Rodrigo Duterte. Imelda knows that she is now receiving backlash from the supporters of Duterte's administration. She is just a human being who unintentionally made comments in public that irked online users. And after making an apology online, there are some netizens were able to forgive her as they understand that she is under pressure. This is because she is carrying a heavy psychological factor for hoping to gain a back-to-back-to-back win for her country after Jamie Herrell and Angelia Ong.
For the curious case of Imelda Schweighart, supporters and fans clearly understand what she is going through. The pressure that is vested upon her is affecting her confidence and self-esteem as she is now competing for Miss Earth 2016. She is currently representing the Philippines and hoping that she is the third woman to continue the winning streak for the Philippines since 2014.

Miss Earth Philippines 2016 Imelda Bautista Schweighart made a controversial route online when she made a comment against President Rodrigo Duterte. She mentioned in front of Miss Austria that the Philippine president is currently doing Hitler stuff here in the Philippines. Miss Austria was shocked and replied to her that that is real crazy. Netizens who witness the conversation were in shock during that time and immediately left numerous comments aggravated by their emotional response towards Imelda Schweighart. Netizens quickly lamented against the verbalization of Imelda Schweighart, which made pageant fans in the Philippines gone wild.

Prior from commenting about Duterte's actions similar with Hitler, Imelda asked Miss Earth Austria if Hitler was from Austria. However, Miss Austria immediately indicated that Imelda made a bad question because normally, Austrians do not really talk about Hitler. But after her statement, she admitted that Hitler was indeed from Austria. The reason behind why Austria never talk about this person is obviously due to his atrocity that left Europe merciless during the height of both First and Second World Wars.


Along with Imelda, here are top 15 predicted Miss Earth 2016 candidates

Beforehand, President Duterte made a comment during a press conference that he likened Hitler's heartless actions during the Holocaust. The president is referring to Hitler's execution of at least 3 million jews during the Holocaust period in the Second World War. This was a comment that generated a backlash from Germany, stating that President Duterte should make an apology for his statements.

President Duterte then apologized to the Jewish community, highlighting that he was referring to the war against illegal narcotics in the country. He hopes that during his term, the Philippines can transform into one of the most peaceful nations in the world. People could walk through the night without being at risk for being assaulted by criminal offenders along the streets. 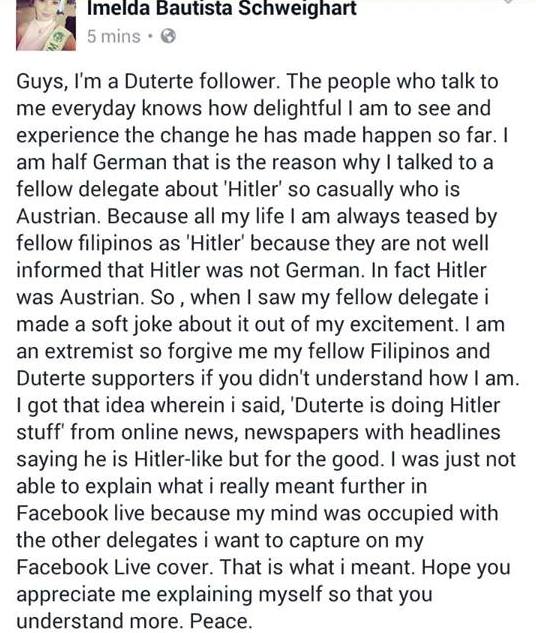 For Imelda Schweighart, she was also sorry for her comparison of Duterte towards Hitler due to his anti-narcotics drive. She indicated that she is also a supporter of President Rodrigo Duterte and did not understand herself why she likened Duterte to Hitler as what she publicly said in front of Miss Austria during a live event session in her Facebook account.

Imelda Schweighart is now competing for Miss Earth 2016 that is held in back in the Philippines after it was held in Austria last year. It is an annual female beauty pageant that aims to promote environmental awareness to preserve our planet. Miss Earth is in its 16th edition of the annual international beauty pageant where Imelda is hoping to clinch the 4th crown for the Philippines this year.

Miss Earth 2016 Imelda Schweighart is also calling for the Filipino fans for their support as she is set to defend the Philippines title that was won by Angelia Ong. Imelda is also included as one of the predicted ladies to penetrate the semifinalist spot during the coronation night of Miss Earth 2016. However, her greatest competitors are Venezuela, Thailand, Mexico, Peru, and Colombia.


As based on this video, what do you think will be the chance of Miss Earth Philippines 2016 Imelda Schweighart? Will she surely land on the semi-finalist position? Finalist? Runner up? or the ultimate winner of the pageant?
Posted By The Story of Anthony
Labels: ENTERTAINMENT, HOME, news, pageant, PINOY, Rodrigo Duterte
at Monday, October 10, 2016