A+ A-
Print Email
Finally, the 65th edition of Miss Universe beauty pageant is hosted by the Philippines for the third time. This is by far, the most important edition for the Miss Universe Organization in cooperation with IMG/WME to experience what it's like to be in the Philippines. For those who oppose the hosting of Miss Universe, they will definitely turn into pageant lovers. Former haters will blend with organizers and supporters will now experience the most exciting cheers by Filipino pageant fanatics who will attend and watch the most prestigious event in the universe. National Directors from different countries around the world will get to experience the warmest and the best Miss Universe ever because it was and will be held again in the Philippines.

After the preliminary show, there were ladies who consistently did well during this portion of the beauty pageant competition that gave an electromagnetic vibe. Ever since the beginning when the delegate flew to the Philippines, there were already who stood out very well. There are ladies who were hyped before the pageant but showed inconsistencies with regards to the styling, confidence, and performance during the preliminaries. There were who consistently stood out during the preliminary show by unleashing their skill in catwalk, elegance, confidence, and stage presence. Pageant fanatics were also amazed because there are underhyped delegates who did well during the swimsuit and gown competition, which is an important screening procedure to determine hopefuls who will enter the semifinals.
The Philippines made an extravagant hosting for the 65th edition of Miss Universe. With more than 7,500 islands, which was upgraded from 7,107 islands, Miss Universe delegates were lucky to have a once in a lifetime experience by visiting several tourist hotspots across the archipelago. All delegates had the chance to witness the natural wonders of the Philippines while vying for the Miss Universe crown.

There are three categories in order for a delegate to penetrate the semifinal round. The first is the interview portion, which will anticipate all corners of interactive skills from each delegate in a closed-door panel interview. The second is the swimsuit round, which will require all delegates to display their carved bodies in a two-piece swimsuit by Yamamay and styled by Chi. All delegates should display their perfected catwalk skills and then confidence in front of the stage while the judges will then give a score. During the gown competition, this is the portion where fashion designers will display their collection and masterpiece that was worn by the delegates during the preliminary round.

After the delegates displayed their fashionable masterpieces by displaying their gowns and swimsuits in the runway through their runway skills and stage persona, the scores will then be tabulated by the staff. Tabulators are licensed accountants from one of the respected accounting offices in the United States, which is the Ernst and Young firm. Even before the coronation night starts, tabulators are the only staff who will know the results basing from the performances of the delegates during the preliminaries. This time, there will be 12 ladies who are lucky enough to be called as part of the semifinalists, which will be called during the first part of the program on January 30, 2017. Are you ready to know the following top 12 delegates in alphabetical order?


AUSTRALIA (Caris Tiivel)
Caris is a silent slayer. Imagine a young child with a lollipop with a high pitch giggling tone. That's how sweet she is. Caris may not have been on the radar than other ladies who often post anything on their social media accounts, this lady could definitely slay the pageant. Caris prefers to compete silently but will bring a supersonic and megalithic bomb, just like what she did during the preliminaries. She walked smoothly during the swimsuit. Her stage presence is vibrant. But one thing about her that makes her more interesting, which is her sweet and bubbly aura, which is hazardous for the other candidates. Watch out for this woman.

*READ: Is the world ready for a transgender to join as a contestant to traditional beauty pageants?

BRAZIL (Raissa Santana)
The girl from the land of Samba has become "La Bomba" during the preliminary round. When her country was called, she instantly exposed her exquisite aura and then dropped a bomb in front of the stage that created an invisible force that pushed the audience backward and took a deep breath. That's how it feels like when watching her, so you better bring your seat belt during the coronation night. Raissa is one of the few consistent ladies who rose to prominence right after she was crowned as Miss Universe Brazil. Her stage presence is very strong enough that she could swallow other delegates in front of the audience.

COLOMBIA (Andrea Tovar)
This woman is the real big thing! Andrea could definitely replicate what Ariadna did last year, and maybe she could bring home the third crown for her country. She showed a superb walk during the swimsuit and the gown competition. Andrea proved that she is one of the best Latina to beat. Facially speaking, she has one of the most charming auras in the competition with a perfect smile and a sweet face. Her confidence level is also high, which elevates her competitiveness during the preliminaries at the Mall of Asia Arena. It is no longer a surprise if she will be called as one of the semifinalists.

DOMINICAN REPUBLIC (Sal Garcia)
The towering fortress of Caribbean is another force who perfectly did well during the preliminary competition. The good thing is, Sal made her height as her best advantage because it literally made her presence become consistently prominent. On stage, smaller candidates should not stand beside her because her presence and towering aura could negatively electrify their presence, making their stage aura weaker. With just a sprinkle of good personality, she nailed both the swimsuit and the gown competition. She currently works as a fashion model, making an advantage point to translate her runway skills on stage.

INDONESIA (Kezia Warouw)
Kezia knows how to play her cards well. Keke always shows positive vibes with other candidates on stage. She made the right decision to make her tone darker, making her a standout. She is very tall, confident, and knows how to play the runway. Her statuesque physique is another asset that makes her interesting candidate. During the swimsuit, she bounced her hips right and left and then paused with a confidence in front of the audience. Keke has a controlled tone during the gown competition while displaying her elegant gown during the preliminary.

MEXICO (Kristal Silva)
Speaking of exposure, Kristal is considered as the most experienced woman in this edition of Miss Universe. Her previous international beauty pageant experience really helped her to shine really well during the preliminary round of Miss Universe. Kristal knows how to use every posture to help her get noticed further. Speaking of smiling with her eyes, Kristal is one of the few who maximizes her stage presence with her smize. Her eyes are her main weapon, which could literally shoot anyone when she is on stage. If Kristal will look directly at you, there is a sudden feeling of being frozen because she already transformed you into a stone because you will be mezmerized by her overall package in front of the stage.

NICARAGUA (Marina Jacoby)
She is undoubtedly the face of the competition due to her charismatic aura and angelic personality. She can be the recipient of Miss Photogenic award if Miss Universe decides to return the award back. Marina proved everyone else that she is a threat to other contestants in this edition of Miss Universe. During the preliminary, her performance is more than perfect. Her catwalk skills, stage presence, audience impact, and her poise are formidable. Her overall performance did not disappoint her supporters from all over the world. This woman could reach as far as top 3 and she may even win the competition.

PHILIPPINES (Maxine Medina)
There are already 7 delegates who won Miss Universe in their home court. Maxine Medina could possibly make this happen. She has been training for more than 9 months since she got the license to represent the country for Miss Universe. She walks very well on the runway, making her one of the well-prepared candidates on stage. Maxine's full transformation makes her stand out than the rest of the contestants. With the full power of her fan base, Filipino will transform into one massive cheering squad that can crack the venue that will shock every audience. Another thing about Maxine is her extraordinary oriental look with a naturally tanned skin tone, which is attractive and appealing to the audience.

*READ: Can Miss Universe Philippines Maxine Medina make a back to back win?

PUERTO RICO (Brenda Jimenez)
It seems that Puerto Rico is back to the world of beauty pageantry. Her body releases an energetic vibe together with her expressive facial beauty and charm to the audience during the preliminary competition. Brenda Jimenez wowed the crowd and the judges with her superb performance. She proved that being the rightful representative of her country can bring the sash back to its dominance. Brenda is also a pretty contestant with an impressive catwalk performance due to long months of training in her home country. She carries more than a complete package when she executed her runway skills using swimsuit and a beautiful long gown.

THAILAND (Chalita Suansane)
Speaking of total package, it is Chalita!!! and not only about her 17  luggage, it is her readiness to fight for the crown. Miss Thailand is creating a superb noise in Miss Universe. She is queenly on stage. Chalita proved that she is one of the best delegates with a consistent aura, confidence, and with a great personality. She knows how to control her style and vibe that translated into perfection during the preliminary competition round. During the swimsuit and gown competition, her personality uplifted her spirit by walking with power and substance through the runway. Chalita is well-equipped with training, experience, stylists, friends, and accessories that made her confidently beautiful on stage.

UNITED STATES OF AMERICA (Deshauna Barber)
Deshauna slightly went off as the pageant goes through. However, she has an undeniable strongest presence during the preliminary competition. Catwalk skills are also great during that night. But one thing about her that can further uplift her spirit to the top. This is about her strong sash factor. Her sparkling presence at the stage makes her shine throughout the runway. One thing about Deshauna that can make other delegates shake their legs is all about her wit and expressive thoughts. If she reached top 6, she could definitely make other delegates faint with her thoughtful answer.

VENEZUELA (Mariam Habach)
She is personifying perfection, which materialized during the swimsuit and the gown competition of preliminary competition. Mariam Habach has the best walk and the best body during that particular screening. With the perfect definition of regal, this girl can easily penetrate top 3 spots during the coronation event of the pageant. This delegate ensemble her invisible superpower through her walk, posture, and stage presence that always make her stand out. As Mariam walks through the runway, her invisible superpower eats other candidates who were beside her on that night. 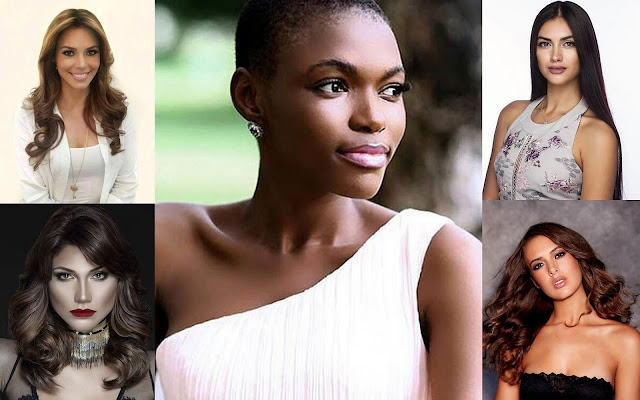 *READ: The shocking worth of Miss Universe crown you should know

So who are your favorites?